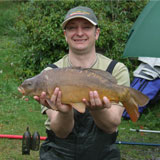 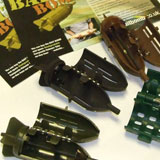 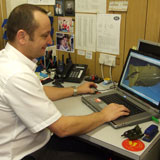 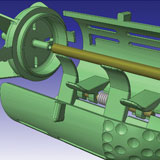 Ferris-Tech Limited is a hi-tech design and development company founded in 2006 by qualified engineers with a passionate interest in angling and angling products. Using the latest 3D CAD technology, Ferris-Tech has developed the worlds first time-release active bait delivery system to eject the bait in a sudden but calculated ‘bomb burst’.

The Bait Bomb idea was first conceived during a Coventry City football match when the 3 founding directors were sharing their fishing experiences. They all agreed on the limitations of traditional bait feeders and the perennial problems of trying to create the perfect ground bait mix and keeping the contents intact during the cast and sinking operation.

"Having previously used other feature based CAD systems, VISI provided the ease of use and freedom from constraints required for the manufacturing environment.”

The patented design of the totally enclosed Bait Bomb was developed using advanced solid and surface modelling technologies from Vero Software. With help from Coventry University and The Warwick University Manufacturing and Design Group, rapid prototyping models were continually produced throughout the design lifecycle to test the aerodynamic performance. During the testing process, the CAD designs were modified by adding golf ball like dimples and tail fins to improve flight stability. The internal weight balance was also perfected to ensure the Bait Bomb always falls ‘right side up’ on every cast.

“The ‘after design’ CAD modifications were an important part of the design cycle” claims Alan Ferrar, Director of Ferris-Tech. “Having previously used other feature based CAD systems, VISI provided the ease of use and freedom from constraints required for the manufacturing environment.”

Alan continues, “Although we had finalised the CAD design, the major breakthrough came with the bio-degradable composite clip that activates the time bomb effect. Once the Bait Bomb has entered the water, the clip dissolves and the Bait Bomb springs open using a spring-loaded hinge. The internal fingers distribute the bait around the hook and create an effective bait cloud to attract the attention of the fish.

The aerodynamic design and the fact it is mounted concentrically on the line ensure the Bait Bomb can be cast further and with greater accuracy than existing feeders. The advanced design not only ensures easy casting, but the hydrodynamics cause the Bait Bomb to rise immediately to the surface when you start the retrieval process. That means the open bait bomb returns to you over the surface of the water like a boat, and so prevents any line snarling on under-water obstructions such as rocks and weeds.”

Commenting on the decision to work closely with Vero, Alan states; “While impressed with the overall capabilities of the software we have also been pleased with its ease of use and the levels of technical support supplied by the Vero team. Vero are highly regarded in our organisation as our software partner with VISI having established itself as an integral part of our operations. It is important for us to know that we have a commitment from a key supplier to support us in a positive manner and Vero meets that criteria whenever required,” he concludes.

The Bait Bomb was officially launched earlier this year at the Go Fishing exhibition held at the Birmingham NEC with already more than 2,000 units distributed through the dedicated Bait Bomb website – www.baitbomb.co.uk.

"Having previously used other feature based CAD systems, VISI provided the ease of use and freedom from constraints required for the manufacturing environment.”