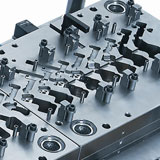 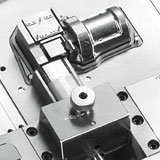 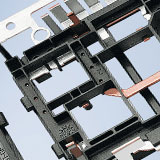 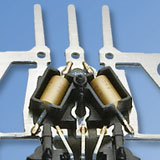 The area surrounding the city of Pforzheim in Southern Germany is becoming a stronghold for Vero Software and a special kind of tool manufacturer, those working with hybrid materials for high precision, micro parts such as electrical connectors and switches. Among them, Kummer GmbH, with their internally developed K’Tecsystem stands out in particular as an innovator in this unique sector serving the automotive, medical and telecommunication markets.

As far back as 1998, the two company directors Wolfgang and Jens Hofmann recognised that the plastics and stamping industry would become increasingly competitive and invested heavily in R&D and forward-thinking technology. Within two years and after thorough internal testing, Kummer introduced their own sequential laminated injection process which combines both metal stamping and plastic injection moulding within a single machine.

Three tools in one machine
With traditional reel-to-reel procedures, stamping and injection machines are connected to each other with regulated loops, as part of a longer assembly line. Using this process, the material is processed in several consecutive steps and the production speed of the entire line depends on the injection cycle, and therefore, the stamping machines have to work at a slower and more uneconomical speed. However, the laminated injection method developed by Kummer (K’Tecsystem), can stamp, bend, form and then also over-mould the processed product with plastic using only one combined machine. This innovative process can manufacture reliable, cost-efficient and high-value components in stamping presses that have a press force range from 25 to 125 tonnes and a stamping speed of up to 1,000 strokes per minute. The plastic injection machines support all types of thermoplastics with a clamping force of up to 200 tonnes and shot weights between 1 and 100g.

Development partner
Kummer seeks direct contact with customers and offers its full range of knowledge in the field of stamping in order to find an economic solution for each technical problem. When an order comes in, the design engineers start working immediately with the client, offering practical suggestions as to how the design could be modified or optimised, in order to make the best use of the laminated injection process and ultimately make the component more cost-effective to produce.

Throughout the complete design and manufacturing cycle, Kummer use the VISI suite of CADCAM solutions from Vero Software. VISI Progress is used for the design of the components and the punch tool, including the development of the sheet metal component and strip layout. VISI Mould is used for the design of the plastic injection mould and both modules work together in a seamless construction process.

“It was important for us to cater for all 3 scenarios using a single 3D system,” states Thomas Härdt, Head of Development and Construction. “Kummer already had an in-house design system from one of the ‘big three’ (CATIA, Pro-E and UG), but found that the system was not efficient for tool design. These systems are fully parametric and so complex, they require 80% of your brain power to foresee the best working practice – which leaves only 20% for the project itself. With VISI, the opposite is true. The system has proved so easy to use that we were already up and running within two weeks and more efficient than with our previous system after only three months.”

Once the tool design is completed, Vero’s Compass Technology is used in the CAM department for 2 and 2½-axis CNC programmes. The feature recognition is capable of analysing the 3D model for regular geometries such as holes, pockets or T-slots - dramatically reducing programming time and eliminating human error. Based on the standard component type (screw, pillar, dowel etc) feature properties are applied during the tool design phase which are automatically picked up by Compass. For example, a hole can be automatically recognised and machined regardless of its diameter, using a different sequence of CAM cycles. “With our previous 2D system, the feature recognitions rate lay between 80 - 90%. With Compass we have already surpassed that mark, and there is still room for further optimisation. In total, we are running 16 licenses of VISI Modelling as a base platform and a number of additional licenses for VISI Mould, VISI Progress and VISI Machining with Compass Technology,” explains Thomas Härdt.

Concluding, Jens Hofmann, Operations Manager at Kummer explains how with three other companies and a banking institute, they have founded a Stamping Technology Scholarship at the Pforzheim University. “There were two reasons behind this, the first being a connection with the local high school; something that is not so easy for a medium-sized business to establish. The second reason is that we wanted to celebrate our location – this is where our unique stamping technology was born…”

Software User Group
Marc Freebrey, Marketing Manager for Vero explains that the Pforzheim area is unique in that there are a highly concentrated number of progressive die companies producing the same type of micro components. “Many of the companies work together to define the CAD standards and the products they use to ensure maximum productivity. Historically, the companies have used a combination of CADDA (2D system), ME10 and NX or Pro-E. However the industry trend has been to move towards a dedicated CADCAM system for mould and die - and the product of choice is VISI. A customer user group has been established where the users are able to vote on their particular needs and define the priority of items put forward to development. This intimate relationship between customer and software provider ensures the product remains focussed on the market requirements and provides the user with an opportunity to help define future developments.”